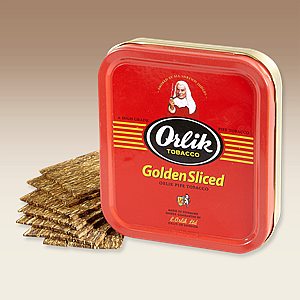 “This blend is composed of golden Virginia tobaccos with a touch of Perique.  A fine natural sweetness in both taste and aroma characterize Orlik Golden Sliced.  This is a traditional Navy Cut Flake i.e. pressed tobacco and cut into slices.  Rub the tobacco slices gently before filling your pipe.” – Orlik Tobacco Company

Orlik has been, and in my opinion, always will be one of the most prolific and excellent tobacco companies.  Based in Denmark, and owned by the Scandinavian Tobacco Group, Orlik is without a doubt admired and enjoyed by a majority of pipe smokers.

One of the most controversial blend related issues is the presence of Perique in the Orlik Golden Sliced.  I do not claim to have any answer to this, but I will chime in with my own opinion!

Personally, I believe that serious pipe smokers need to smoke at least 1 tin of Golden Sliced.  Not only in the Western hemisphere, but in Europe and Asia it is one of the best selling and popular blends.  Interestingly enough, Orlik sells tobacco to America in a tin, and to Europe in a pouch.  This says more about the pipe culture of a culture than it doe about anything.  Personally, I just love insight like this into another community!

First and foremost, Orlik has fantastic looking tin artwork.  It is very sleek and elegant, yet when you see it, it makes you want to try it.

When I popped the tin, the notes I instantly picked up on were a sweet hay that had been sprinkled with different citrus notes.   I also felt that the tin note was the strongest presence of Perique.  I could pick up on the smallest hint of fermentation and spice that would come from the Perique.  So at this point I still expected to to be tasting Perique when smoking Golden Sliced.

Golden Sliced is cut into a beautiful flake.  WIthout a doubt Orlik and Mac Baren have the most cleanly cut flakes I know of.  It must be in the Danish tradition to do so for they are both located out of Denmark.

The flavor of Golden Sliced is exactly what you would expect a hay scented Virginia blend to taste like.

When smoking Golden Sliced, you are transported to a place of class and sophistication out in the midwest.  You are outside having a decadent lunch of blackened salmon and citrus steamed vegetables with colleagues on the right and left of you.  You are next door to a growing hayfield, so while you are enjoying class, cuisine, and companionship all while taking in the softly strong notes of hay.

Most of the flavor from Golden Sliced comes from a sweet background of the VIrginias and the rest is laced with hints of citrus that constantly arise.  For me, I couldn’t taste the hay, but rather, smelled and experienced hay while smoking.  So while I was not tasting hay, I was experiencing it.

Perhaps the best part of smoking Golden Sliced is the utter smoothness of the smoke.  It really rolls across the palate with a delicate respect that only the highest level of tobacco carries.

The room note of this Non-Aromatic blend is fairly simple.

While the hay notes will continue and persist through the billowing smoke clouds, the aroma is fairly light.  It is just average in the category of enjoyability for bystanders.  All in all, decent room note.

As I mentioned before, I believe this tobacco pairs really well with a blackened seafood and citrus steamed vegetables.

I know that this is not a typical drink or snack pairing suggestion.  But when we are dealing with an extraordinary tobacco, it deserves to complimented in the proper way.  Smoke a bowl before lunch or dinner, enjoy the entree’, and then smoke a bowl.  You will find that eating the fish really relieves the smokey flavor left in your mount, and refreshes and repairs is for smoking another bowl after dinner.

This is a little tricky.  I want to rank it somewhere in-between mild and mild/medium.

Golden Sliced is a mild blend.

It may taste stronger to some, but that is only because of the high quality and presence of quality tobacco.  In reality I don’t believe this blend is much more potent than a mild blend.  I can see how some would say it is a mild/medium blend, but I cannot reason that it deserves that high of strength.

I have not mentioned this yet, but one of the best aspects of this blend is the incredibly low price you can purchase it at.  For less than $7 for a 50g tin, from a site such as Pipes and Cigars, this price is unbelievable!

The only reason why I rank it  7 instead of an 8 or 9 is because I want more intensive flavor.  Compounded with the fact that I cannot find Perique, I just can’t give it a higher score.