The Orlik Dark Strong Kentucky (DSK) is one of the most prolific and popular blends on the market.

Having been out of distribution for years, the re-release of DSK has caused an uproar of excitement and positive angst in the pipe community.  There was a point when I couldn’t scroll down my feed in Instagram without seeing a picture of someone smoking DSK or packaging up their 5 tins to be saved in the cellar.  After about a week of seeing all these posts, I decided that enough was enough.  I was going to order a few tins of DSK and see if it lives up to its reputation.

For one, I was worried that if I neglected to order DSK, it would one again sell out and be out of production.  Luckily, I later discovered from Pipes and Cigars that supply is plentiful and until early summer 2015 DSK is an exclusive Pipes and Cigars item.

I quickly discovered that DSK was not only a trendy comeback but an exquisite endeavor through the myriad of good pipe tobaccos available online.  With its recognizably cut and colored flake, perfect flavor, and satisfying smoke, DSK deserves and should be a part of every smokers rotation.

Dark Strong Kentucky is a tobacco that reinvigorates the smokers excitement for a long-lasting hobby.

Admittedly, I was surprised when I opened DSK for the first time.  I was not prepared for the light/dark contrast in the flake.  I was so intrigued and excited about seeing something new that I immediately knew I was going to enjoy the smoke.

Knowing that this was going to be a Dark Fired Kentucky blend, I expected the tin note to be incredibly smokey and to have a little note of sweetness.  What I found is that the smokey aroma I expected was present, but was far less potent than I expected.  As another surprise, I picked up on decent fruit notes that was roaring with sweetness.

I generally like to fold my flake and smoke it that way.  But due to the unique form of DSK, I decided that it would be better to rub it out and mix the bright Virginia tobacco with the Dark Fired Kentucky.  I personally believe this method will work better for you, but since I never tried just folding it, I cannot say so for certain.

One of the concerns I had when packing is that DSK was quite brittle and dry.  I was very fearful that my smoke was going to burn hot and long and really be a chore for one of my pipes to handle.

Generally when smoking Kentucky tobaccos, I tend to notice that they do not smoke very smooth.  This was not the case for DSK. For being such a formidable tobacco, DSK really did roll out of the bit and onto the palate with a ginger step that was very delightful to the smoker.

The flavors of DSK are intricate, yet simple.  The smokey flavor of the Kentucky is balanced perfectly with the natural robust fruit flavor of bright Virginia.  All of this was apparently coated with a mild licorice casing.  To be honest, I was not able to detect much of a licorice flavor, I could only taste the straight and apparent Kentucky and Virginia.

The biggest difference in smoking DSK with most other tobaccos is the overall quality.

When smoking DSK, the piper can tell that this blend was crafted with care and thought, that the tobaccos are of the highest possible quality, and that is was created with a purpose: to please pipe smokers.

There is not much of a difference between the room note of DSK and other popular Dark Fired Kentucky tobaccos.

It is slightly milder in aroma.  It is possible that those around the smoker will notice this small difference, but the odds of that are small.  Generally those who are not used to being around the smoker will find the note slightly agitating.  However, all others will be able to appreciate the beauty in the strong smokey note of DSK.

DSK was one of those blends that made the smoker feel like they were in the outdoors on a camping trip.

But, generally speaking, the odds of that being the case with most smokers is slim.  That is why I believe that pairing DSK with a coffee and Kahula mixture is the best way to go.  The bittersweet flavor of coffee beans intensifies the flavor of the Dark Fired Kentucky tobacco, while the Kahula matches really well with the sweetie fruit flavor delivered by the bright Virginia tobacco. 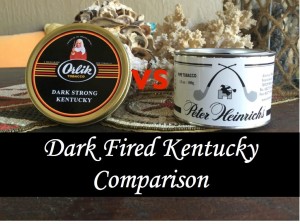 There is no doubt left to the smokers mind that this tobacco is one to be reckoned with.  There is plenty of flavor and nicotine available for any smoker.  On the other hand, the flavors that are so present are kind and enjoyable flavors that are welcoming to almost all smokers, no matter their usual preference.

DSK is a tobacco that can find its way to almost every smokers shelf.

One of the big “scandals” of the pipe tobacco world is the strong similarity between Orlik Dark Strong Kentucky and Peter Heinrich’s Dark Fired Kentucky.  From the research that I have done, it appears to be the same tobacco.  I say that but there are many pipe smokers who claim they taste differently from one another.  I urge you to try them both for yourselves and develop your own opinion on the matter.

Without a doubt, DSK is an amazing blend.  It is one of those limited tobaccos that are always going to be popular and sold out.

I give Orlik Dark Strong Kentucky a 9 out of 10.

It is hard for me to see anything at all wrong with DSK.  If I had my way, it would be a little more moist and the flavors would penetrate the palate more.  But let’s be honest, that is just nit-picking.

DSK is a fantastic blend.  It is respected everywhere, as it should be, and smoked by many.  It is my wish that it is smoked by all so that all may gain an appreciation of smoking a truly delicious pipe tobacco.

Pictures provided by Pipes and Cigars, Pipes Magazine, and YouTube.